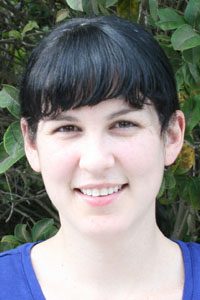 Casey M. Schwarz completed her PhD in physics at UCF in 2012 under the supervision of Prof. Leonid Chernyak studying the radiation effects of semiconductor transport properties using electron beam induced current and Cathodoluminescence characterization techniques. She won the graduate student award for the Lindau Meeting of Nobel Laureates for her research in 2012. Schwarz went on to teach at Valencia Community College in 2012 as an Adjunct Professor of Physics.  Schwarz then joined the Kuebler research group in spring of 2013 a post-doctoral researcher where she is currently investigating the processing and properties of novel materials for future optical device applications. This includes direct laser writing of 3D micro-structures and investigation of their physical and optical properties. Schwarz’s work in this area has led to her presenting and publishing her work with chalcogenides at the 2014 Photonics West SPIE conference in San Francisco. Schwarz has contributed to two proposals, the Space Research Initiative (SRI) and the Florida Space Grant Consortium (FSGC) which were both funded. Her interests include 3D direct laser writing of multi-component chalcogenide materials, development and design of optical devices, and optical characterization. She is very active in her outreach activities which include mentoring high school and undergraduate students and participating in promotion of women in science events and organization. Casey is also an active member of Women in Lasers and Optics “WiLO” group.