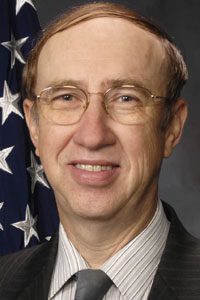 Kenneth L. Schepler was born in Clinton, Iowa. He was commissioned as a 2nd Lieutenant in the U S Air Force after receiving his BS in physics from Michigan State University in 1971. During an academic delay he earned masters and PhD degrees, also in physics, from The University of Michigan. During six years of active duty in the Air Force he investigated the bioeffects of laser radiation at the School of Aerospace Medicine at Brooks AFB TX and evaluated test data at the Air Force Technical Applications Center, McClellan AFB CA. In 1981 he joined the Avionics Laboratory [now the Air Force Research Laboratory] at Wright-Patterson Air Force Base, Ohio and served there as a research physicist for over 32 years. He retired in January 2014 and is now a Research Professor (courtesy faculty) at CREOL.  His interests include solid state laser physics, laser materials spectroscopy, and nonlinear frequency conversion. Dr Schepler is a Fellow of the Optical Society of America and a Fellow of the Air Force Research Lab.