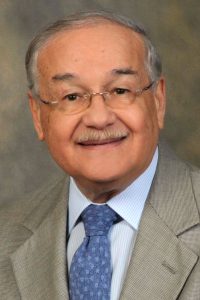 Bahaa E. A. Saleh has been distinguished professor of optics and photonics at CREOL, The College of Optics and Photonics, University of Central Florida, since January 2009. He served as dean of CREOL from January 2009 to December 2019. He was a faculty member in the Department of Electrical and Computer Engineering (ECE) at Boston University in 1994-2008, and he served as Chair of that Department in 1994-2007. He also served as Deputy Director of the Gordon Center for Subsurface Sensing and Imaging Systems, an NSF Engineering Research Center in 2000-2008.

His research contributions cover a broad spectrum of topics in optics and photonics including statistical and quantum optics, optical communication and signal processing, nonlinear optics, photodetectors, image processing, and vision. He is the author of three books, Photoelectron Statistics (Springer-Verlag, 1978), Fundamentals of Photonics (Wiley-InterScience, 1991, 2nd edition, 2007, with M. C. Teich), and Introduction  to Subsurface Imaging (Cambridge, 2011), as well as more than 600 papers in technical journals and conference proceedings. He is the founding editor of the Optical Society (OSA) Advances in Optics and Photonics.   He served as editor-in-chief of the Journal of the Optical Society of America A from 1991 to 1997, and Chairman of the Board of Editors of the Optical Society of America from 1997 to 2001.  He also served as Vice President of the International Commission of Optics (ICO) from 2000 to 2002.  Saleh is Fellow of the Institute of Electrical and Electronics Engineers (IEEE), the Optical Society of America, and the Guggenheim Foundation.  He is the recipient of the 1999 OSA Esther Hoffman Beller Award for outstanding contributions to optical science and engineering education, the 2004 SPIE BACUS award for his contribution to photomask technology, the 2006 Kuwait Prize for his contributions to optical science, the 2008 OSA Distinguished Service Award, and the 2013 C. E. K. Mees Medal for lifelong multidisciplinary contributions to statistical optics, quantum optics and image science. He is a member of Phi Beta Kappa, Sigma Xi, and Tau Beta Pi.

Conducting research on the generation and detection of nonclassical light, such as entangled photons, and its quantum information applications, including quantum imaging and quantum communication.